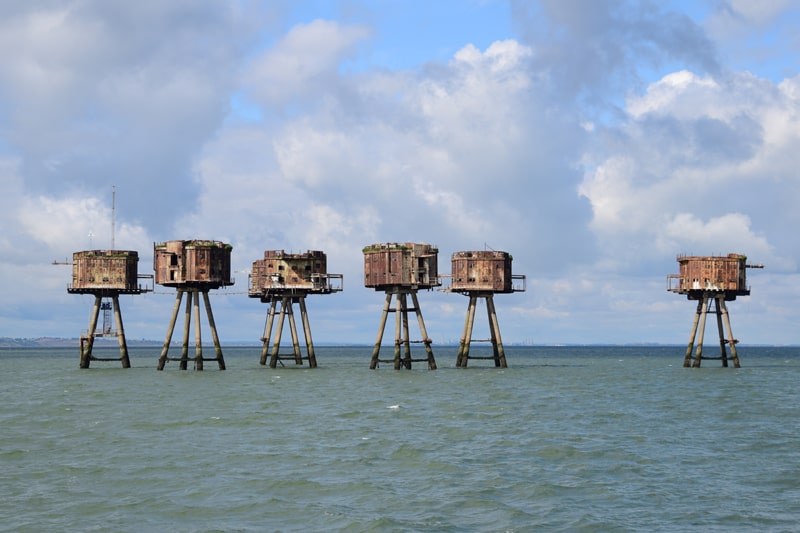 A total of three sea forts under the control of the Army were constructed in 1941/42 to protect the vital shipping lane and air corridor along the River Thames which had suffered greatly from magnetic sea mines dropped by German aircraft. Devised and named after their creator Guy Maunsell, the eccentric forts were constructed completely off-site in Gravesend before being towed to their respective locations on naturally occurring sandbanks in the North Sea. However, these forts weren’t the first; a year earlier the Navy has erected four of their own, and two design variations existed; the one used predominantly by the Army comprising seven independent octagonal riveted steel blockhouses each supported by four 65 ft high reinforced concrete cylindrical legs, while the second original Navy design consisted of two much larger reinforced concrete legs supporting a single gun platform. Duties on board these behemoth structures would have been anywhere between 4 to 6 weeks at a time, with ten days of shore leave after each duty. Initially the Naval forts 120 men, and the Army forts housed around 165 soldiers; but this was later increased to 265 soldiers to counter the increased aerial threat posed by the V-bombs. The forts in whole were a success with reports of over 20 aircraft and 30 V-bombs being shot down.

A comparison of a naval fort as it was being constructed in 1942 to how it sits now. The 2017 image is of Knock John Fort, one of only two remaining out of four constructed.

The Army forts were the more elaborate of the designs. Each of the seven towers came together to form a formidable defence. Co-ordinated by a central control tower operating radar and connected by steel walkways, four 3.7in HAA (heavy anti-aircraft) guns provided the majority of the firepower, while two 40mm Bofors guns were also mounted on the roof of a tower, and a searchlight tower provided illumination to enable the guns to engage low flying aircraft. Each two storey tower was equipped with a boiler for heating the accommodation and providing warm salt water for washing. They would have also housed ablutions, recreation rooms, generators, a cookhouse, plotting and observation rooms, spares, equipment stores and ammunition magazines, while the weapon platforms were on the roof of each tower. Of the three original Army forts in the Thames, both Redsands and Shivering Sands remain. After being involved in a shipping collision in 1953 and being demolished finally in 1960, the remains of Nore Fort now sit near Cliffe as a pile of mangled concrete and steel. Shivering Sands Fort also suffered damage in 1963 when a ship collided with one of the gun towers, but the remainder of the fort was undamaged. After a colourful history as pirate radio stations, both Redsands and Shivering Sands now sit abandoned, however an enterprising group hopes to rejuvenate and restore Redsands Fort with the intention of welcoming intrepid visitors at some stage.

Constructed earlier than the Army forts, the naval structures were of a very different construction. Two cylindrical concrete legs supported a single steel platform housing radar equipment, two 3.7in heavy anti-aircraft guns and two 40mm Bofors anti-aircraft guns. With up to 120 men stationed on these platforms, living conditions must have been difficult. Each leg was subdivided into seven levels and served as living and sleeping accommodation, as well as ammunition and general storage. Power to both the radar platform and living quarters was provided from generators at the top of the towers; and I am sure the constant drone of these generators along with the smell of diesel fuel and fumes must have been quite uncomfortable for weeks on end. Following storm damage in 1953, and a collision with a ship the same year, the sea fort at Nore was a risk to passing shipping and dismantled in 1959. With the valuable steel being scrapped, the concrete bases were towed and dumped near Cliffe Fort. At low tide they are accessible and give a glimpse into the superstructure which is ordinarily hidden below the surface of the sea.