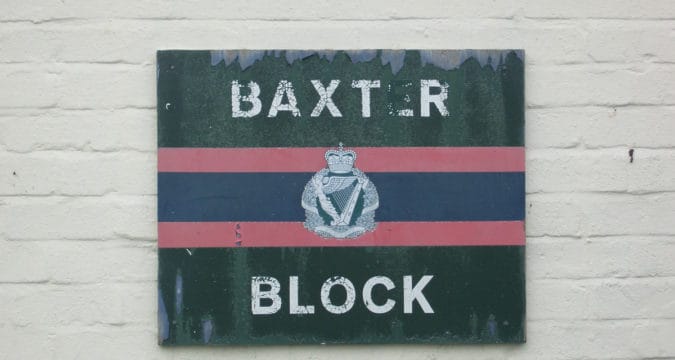 Baxter Block as it was later known was an iconic accommodation cluster within Ballykinlar (Ballykinler) Camp in Country Down. This portion of the accommodation had a long and colourful history, first being relocated from The Curragh camp in order to house the newly raised 36th (Ulster) Division, and later to house republican internees in the early 1920s. Since then, the rudimentary buildings were used as overflow accommodation for the training camp. In 2012/13 the last of the block was demolished, and after Lottery funding had been received, one of the blocks was painstakingly dismantled and relocated to the Somme Heritage Centre on the edge of the Clandeboye Estate, where the 36th (Ulster) Division trained prior to their deployment to France during the First World War.

Why was it called Baxter Block?

Added January 2017. After a chance piece of research, I discovered perhaps the history of the name for this historic block in Ballykinlar. Henry Joseph Patrick “Harry” Baxter OBE GM KM (8 April 1921 – 10 January 2007), an Irish born Catholic, joined the British Army in 1942 as a career soldier. In 1973, Baxter, now Brigadier, assumed control of the Ulster Defence Regiment (UDR) as Regimental Commander and continued through some of the Regiments more troubled years. He remained as Colonel Commandant until 1986. It is more than likely that as the UDR was stationed and trained in Ballykinlar that the Baxter name be given to this block.

Block 43 has found a great new home at the Somme Museum in Conlig. After being painstakingly dismantled and rebuilt, it now looks better than ever and is open for visitors.