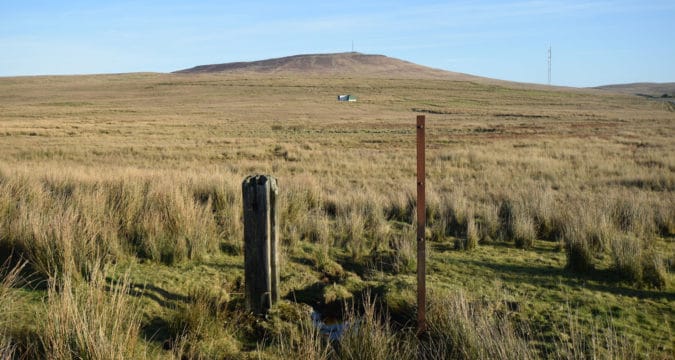 In the hills above Belfast on Divis is a disused 600 yard military firing range, constructed in 1943 most likely to accommodate training for the high numbers of American troops in the country. A copy of the standing orders still exist, giving an overview of the classification and type of activities the range was licensed for. Two main activities could be undertaken:

It is understood that the range was used until the 1970s, and the newly formed Ulster Defence Regiment is known to have used the area. As the security situation deteriorated, it was likely that remote ranges such as this were abandoned in favour of more secure training centres such as those at Ballykinlar (County Down) and Magilligan (County Londonderry).


There is still some evidence of this range or danger area boundary around Divis. At appropriate distances there would have been red flags flying when the range was active, these were often in randomly selected positions, but with the safety map overlaid it is a bit clearer to see why they may have been positions where they were. A copy of the range bylaws and safety notices would have also been displayed by the entrances to the range.

The only structure that exists is what might have been a target shed or troop shelter. Located at the 100 yard firing point, this is a likely position for such a building, a corrugated hut. However, upon closer inspection there are some peculiarities with the building that lead me to think it is not a simple as it first appears.

This curious building may have had an operational or training purpose. The gallery looks out over a flat area of Divis, and on the horizon are visible a number of farmhouses. It also has a clear line of sight to and along Divis road running west towards Crumlin and Aldergrove. And 13km away, almost on a line of sight, is RAF Aldergrove. It is possible that this building contained optical equipment to observe the road or Crumlin area. It may even have been an observation training facility. Whatever the purpose, it is certainly a bespoke structure and one I have not come across before.

Whatever the purpose of the building, it is certainly curious but almost certainly associated with military activity in the area. I will continue to search for answers as to the operational or training activities that once took place in this strange annex.

The area was MOD land from 1943 until it was decommissioned and ownership passed to the National Trust in 2004. It is now open to the public and has some stunning and exposed trails for walking and mountain biking with commanding views over Belfast on a clear day if you dare to brave the changeable conditions.